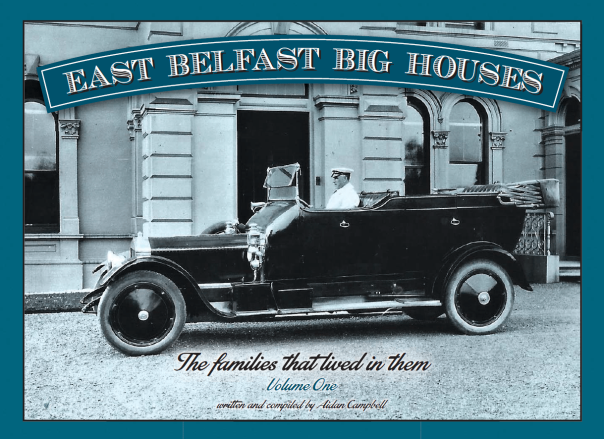 A brief preview of some of the content of the forthcoming ‘East Belfast Big Houses’ book and some of their residents.

Jacob Connup’s ‘Bird’s eye view of Sydenham, Belmont and Glenmachan’ was published as a lithograph in 1864 and was the front cover of a previous publication (see East Belfast Revisited Volume. 1). Some accompanying notes remarked that ‘Belfast town centre had become largely commercial with fewer residents and the population began to move towards the suburbs. The increased transport system increased this trend and east side of Belfast became a very obvious place for those seeking a country mansion. Gently sloping with fine views across Belfast Lough the area was developed by Sir Thomas McClure who made new roads and planted trees’. There weren’t that many houses in the area in those days and it would soon change.

‘Lismachan’ is located at 378 Belmont Road and was built in 1870 becoming the home of John Greeves in 1877. The architect was Thomas Jackson (who lived nearby).Two of his daughters Elizabeth and Georgiana would later marry the Greeves brothers John and Thomas Malcolmson whilst his son Anthony would marry a Greeves sister who was also named Elizabeth. Above is a south facing view of Lismachan which ensured sunshine on the front of the house in the afternoon with great views over Belfast and the gently undulating, well-wooded hills make for a great setting.

‘Beechgrove’ was located on the corner of Sydenham Avenue opposite St Mark’s church. It was purchased by Edward Gullery in February 1920 on his marriage to Rosella Corr. He died in 1954 but the house remained in family ownership until Rosella died in 1983, a total of 63 years. The house was then acquired by property developers and demolished and the site was re-developed with modern housing and re-named ‘Sycamore Grove’. Built in the 1850s and first called ‘Aspen Villa’ (or Aspenville), it was originally the home of architect James Entwistle who is credited with providing the area with the name of ‘Sydenham’ (see Sydenham p.3).

Road-going transport was in the throes of major change after the First World War when home-delivery service businesses such as coal, bread, mail and milk were making the transition from horse-power to mechanization. T. G. Emerson acquired his first mechanized vehicle (above) after the move to ‘Loretto Cottage’ on Castlereagh Road and it has the name of Crystal Spring Dairy on the side. The truck was locally manufactured by Chambers & Co at their East Belfast factory located not far away at 15-23 Cuba Street, Ballymacarrett and the registration number is OI 7876. Belfast DVA licensing office used the number series OI 1 to OI 9999 during the years 1904 – 1921 when there was not much traffic on the roads.

The Governor of Northern Ireland, Earl Granville and the Countess Granville (a sister of the Queen Mother) visit Camlin’s Nursery at Knock in 1951 to inspect carnations named in their honour. Ernest Camlin, right, with sons Davvie, centre and Ernie at the rear greeted their guests. The Countess was described in press reports as an ‘enthusiastic and indefatigable gardener’ and her carnation was grown from the ‘Michael Shane Camlin Carnation’. It was described in the press by the Camlins as ‘the finest flower they had hitherto produced’. Owner Ernest Camlin lived at ‘Kingsden Park House’, Knock.

In 1893 ‘Beaconsfield’ was owned by wealthy tea merchant Fred Thomas Hurley (left). His eldest son was Fred Arthur Hurley (right, in 1887). Young Fred was given a birthday present in 1895 of the very latest photographic technology, a tripod-mounted half-plate camera and we have him to thank for photographs of Beaconsfield at Knock plus a few others of the surrounding area. Amateur photography was in its infancy back then and not widely available – unlike 2018 where it seems that everybody is taking photos of their lives and posting them on the internet.