It follows on from the publication of 11 local histories covering areas of East Belfast and 1 on South Belfast. On this occasion the theme is Greater Belfast. The book takes the form of a number of views of many of the areas of Belfast from years ago, especially from old postcards and these scenes are compared with a modern photographs taken from, where possible, the same location.

Belfast (Irish: Beal Feirste – ‘mouth of the sandbank ford’) is the capital city of Northern Ireland. The site of Belfast has been described as ‘not built on a perfect site’ given that the original settlement was located on low-lying land on the Co. Antrim side of the River Lagan. It was during the Victorian period that wealthy business owners moved out of the old town and built grand villas on the hills surrounding the city.

There are views of big houses, grand public buildings and churches, public transport including trams, trolleybuses and steam trains, factories and suburbia. Many of these scenes are remarkably unchanged and much of the character of the bustling industrial city remains, while many locations have been swept away and are unrecognizable following recent developments.

So how has Belfast changed over the years?

The statue of Queen Victoria in front of Belfast City Hall was originally located in Donegall Square North but now looks in the direction of Donegall Place and Royal Avenue. The activity in the foreground involves ‘building air raid shelters during the crisis, September 1938’. The Second World War would begin a year later in September 1939. The building in the distance in Donegall Square East is Imperial House which was constructed in the 1930s on the site of the Linenhall Hotel. Alongside is the columned frontage of Donegall Square Methodist Church, built in 1847, which survives although this is now the headquarters of Ulster Bank. 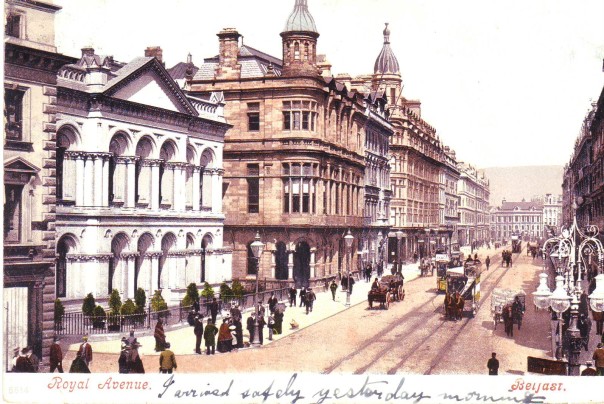 Royal Avenue begins at Castle Place and continues to Donegall Street. It was opened up around 1880 and replaced the much narrower Hercules Street which mostly consisted of butchers’ shops. The aim was to create a much grander and more dignified thoroughfare with more regular building lines and facades as this 1900 scene demonstrates. The white building on the left is the Provincial Bank (now Tesco Metro) built in 1867 and just beyond it the first building with the cupola is the Ulster reform Club originally built by Ulster members of the Liberal Party, to celebrate William Gladstone‘s victory in the 1880 UK general election. The second cupola belongs to the luxurious Grand Central Hotel which was built in 1893, became an army base in 1972 and was demolished in the 1980s for the new Castlecourt shopping centre.

The Holywood Arches were railway bridges that carried the Belfast & County Down Railway (BCDR) line across the Holywood Road and Upper Newtownards Road (pictured in 1962) to Newtownards via Comber from May 1850. However they are not located in Holywood and are not arches. The BCDR has been described as ‘a child of the 1846 railway mania’. The line was closed in 1950 after nearly one hundred years in business and the railway arches were later demolished. However, the stone pillars were left in situ for several years and then demolished in the 1960s. Unfortunately as road traffic increased this created a well-known bottleneck on the main road to Stormont Parliament Buildings, the seat of government in Northern Ireland, and there is barely enough space for this trolleybus to pass. 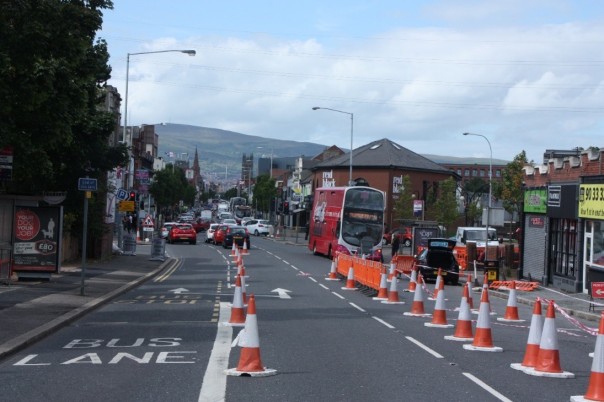 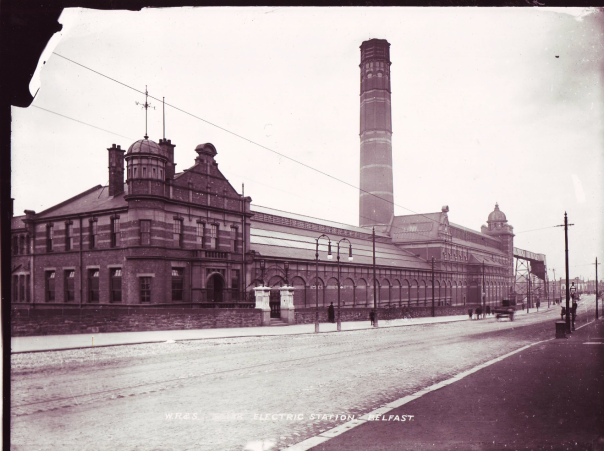 Across the Albert Bridge the road becomes East Bridge Street and on the corner of Laganbank Road this was how the municipal electricity works and offices described as ‘late baroque’ in architectural style looked in 1943. This power station was opened in 1898 and was the second to be opened in Belfast. A small predecessor had been opened at Chapel Lane in 1895. This one was built to supply the needs of the growing city and the electrification of the horse-drawn tramway system which was completed in 1905 and the last of the power station buildings were demolished in the 1980s. Santander Bank (below) now occupies the site although the gate posts of power station have been thoughtfully retained.

The ornate Venetian Gothic style gate lodge with clock tower was designed by architect William Batt in the 1870s and built in a mixture of brick and stone. It stood at the entrance to Botanic Gardens but was ‘wantonly demolished’ in 1965 so that the site now seems rather empty. The large house behind the tram was built in 1889 and is remarkably unchanged standing at the junction of University, Stranmillis and Malone Roads. The electric tram is an early model which included an upstairs roof to protect passengers from the weather and the young trees at the road side have grown considerably over the past. 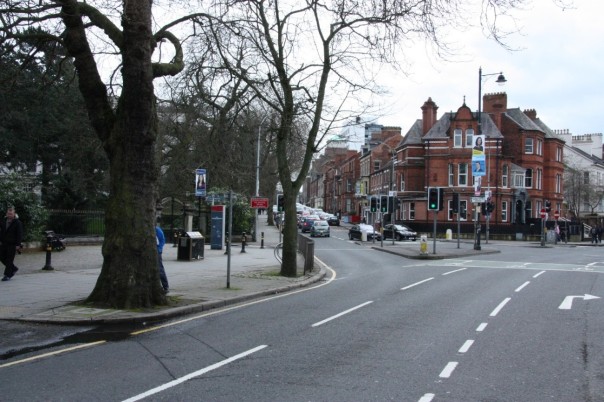 Many of the streets in the Shankill area, such as Leopold Street and Cambrai Street were named after places and people connected with Belgium or Flanders, where the flax was grown from which linen was woven. The West Belfast Division of the original Ulster Volunteer Force organised in the Shankill area and many of its members saw service in the First World War with the 36th (Ulster) Division. St. Matthew’s Church of Ireland (above), at the junction of Shankill Road and Woodvale Road, was rebuilt in 1872 and takes its name from the original church which had sat in the grounds of Shankill graveyard and had its last burial in 1934. Bishop MacNiece, of the Church of Ireland, who was the father of local poet Louis MacNiece, once described St Matthews as ‘an enlarged shamrock’.